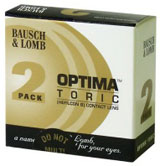 Vial contacts are long-lived lenses that you can wear for up to a year, as long as you remove them every night before going to bed. Of course, you need to clean and sterilize them on a daily basis as well. These gas-permeable contacts come as both soft and rigid lenses.

Modern contact lenses were developed about half a century ago, yet the history of lenses can be traced to the 1800's when the Englishman Herschel introduced the first ground contact lens. Later in the same century, the German scientist Muller created a lens meant to protect an injured or infected eye and the Swiss optician Fick introduced the first actual contact lens. These early lenses, though, were heavy and too hard to be worn comfortably.

Thanks to the efforts of Czechoslovakians Wichterle and Lim in the 1950's, functional soft lenses made their debut. The advent of the first gas permeable lens in 1971 provided CL wearers with a vial lens that allowed the eye to continue "breathing" oxygen — a prerequisite for a comfortable contact lens experience. The first gas permeable lenses were made in a soft material called hydrogel, while today there are both soft lenses and hard or semi-rigid oxygen permeable vial contact lenses (called RGP lenses).

At the start of the eighties a few new types of lenses were introduced in vial packaging, including tinted lenses and extended-wear vial lenses.